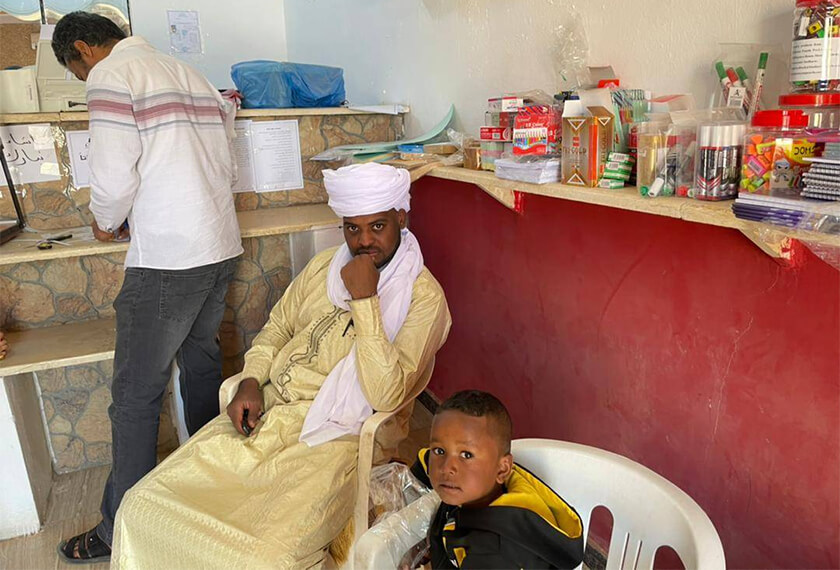 When intense clashes erupted in Murzuq in 2019, 39-year-old Wardkoo, his wife Harday and their 5-year-old daughter Sukka, had no choice but to leave their family-run photocopy center and move 100 km east, to the small city of Umm al-Aranib.

Later in that year, when the family returned to Murzuq, they sadly realized that the city’s conditions had drastically worsened. Entire neighborhoods were empty, public services and infrastructure were severely disrupted and hindering access to basic services such as water supply, sanitation and electricity.

In 2020, Harday discovered she was pregnant and the family was full of joy. When she was about to give birth, she realized there were no hospitals in Murzuq equipped to provide maternal care during childbirth. Harday and Wardkoo had to drive 135 km towards Sebha, where the closest available health center that provided maternal care was located.

Due to the long distance and poor infrastructure, Harday suffered severe complications during the unsafe journey to Sebha, resulting in the loss of the baby. She was in critical condition and had medical care for a full month.

A little hope was regained when this family heard that the Italian Agency for Development Cooperation (AICS), in the framework of the EU-funded Baladyiati programme, would be collaborating with local stakeholders and several actors at the municipality level, to improve the provision of health services for the communities of Murzuq. In partnership with the Italian ONG CEFA, two priority health facilities in Murzuq will be rehabilitated and provided with medical equipment and professional trainings for medical and paramedical staff.

Harday and Wardkoo hope that the Baladiyati programme will allow the communities of Murzuq to access better healthcare, and that in the future no one will have to travel away from Murzuq to receive basic health services. Their wish is that nobody else will have to endure what their family has.

This story was written by AICS based on content collected on ground by CEFA
Photo credit: CEFA