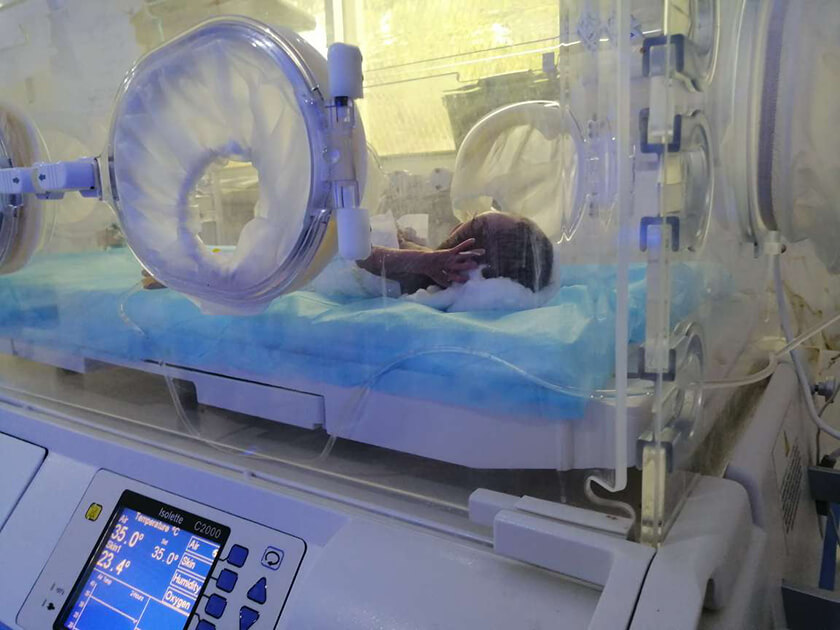 Fadwa is a 26-year-old woman from Al Bayda, the fourth largest city in Libya, located in the northeast. In December 2020 she gave birth to her first children, twins Yassin and Ahmad. During pregnancy, Fadwa endured health complications that caused her emergency hospitalization at the Althawra Hospital, the public secondary-level hospital in the area, a facility severely affected by limited resources and lack of medical equipment.

While at the hospital, doctors had to perform a caesarean section to save the life of the babies, who came to this world 10 weeks before term, each weighing less than 1 kg. Both preterm infants suffered from serious breathing problems and were in urgent need of incubators to help give them the necessary oxygen to survive. Normally, the oxygen is delivered to infants through double-prong nasal cannulas which unfortunately were not available at the Neonatal Department of the hospital.

“The Neonatal Department is suffering from a lack of critical medical equipment, including incubators, as well as many other key supplies,” said Areej Alfaidi, Paediatric Doctor at the Hospital. Dealing remarkably with the limited resources available, Dr. Alfaidi had no choice but manually adapt the adult-specific cannulas to deliver the required oxygen to Yassin and Ahmad.

However, one day when Ahmad presented as stable, the understaffed Neonatal Department had to deal with an unexpected number of newborns, all requiring urgent healthcare. Due to limited capacity, Ahmad lacked the attention needed: when doctors realised that the oxygen cannula was no longer fitted into his nostrils, it was too late. Fadwa’s pain was slightly alleviated by the improved condition of Yassin, who is currently doing well, against all odds.

Ahmad’s loss and the suffering of his mother could have been prevented with an improved healthcare system that is able to cater all patients. To ensure Fadwa’ story will not be repeated, the NGO Premiere Urgence Internationale is partnering with the Italian Agency for Development Cooperation (AICS) to boost the capacity of Althawra Hospital and five other health facilities in Eastern Libya. Thanks to the programme “Baladiyati”, funded by the EU Trust Fund for Africa, in the coming months the hospital will receive medical equipment and key supplies, as well as training programs that will be offered to medical and paramedical staff.