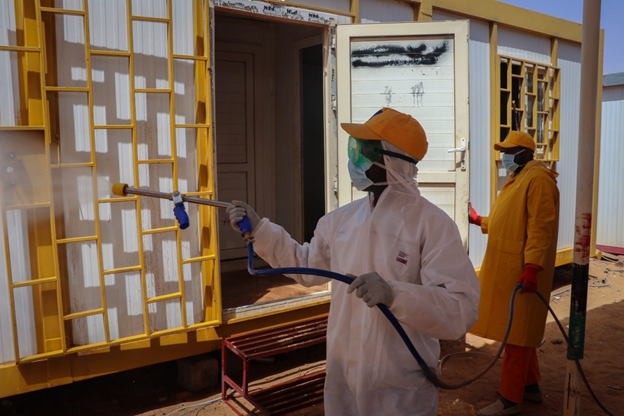 When the threat of the Coronavirus outbreak arose in Libya, authorities took a set of decisions to tackle it in all regions and cities of the country. They included disinfection campaigns of public spaces and allocation of isolation rooms for people affected.

Ghat, a municipality located in the southwestern part of the country, 1360 km from Tripoli, is particularly vulnerable. The city was heavily affected by floods during the summer of 2019. Flooding disrupted delivery of basic services to residents and created conditions for potential disease outbreaks.

The municipality is bordered by Algeria and Niger and witnesses a high rate of travel movements and migration. This is an additional matter of concern for many residents as COVID-19 pandemic is spreading.

“When the threat of Coronavirus began in the country, people in Ghat were very afraid and confused because this is something new to them. They are aware that the city is very sensitive to COVID-19 as it connects to neighboring countries and has intense movements,” said Mr. Bilal Al Turki, Head of Cleaning and Technical Services Unit at the General Company for Cleaning Services in Ghat.

“Residents of Ghat were in fear because they believed that the southern regions are marginalized, and the authorities do not have the capabilities to deal with such situations,” declared Ms. Amal Al-Nani, Technical and Social Coordinator in Ghat and Chairperson of “I am a Libyan Woman and My Son is A Foreigner,” organization for civil and charitable work.

Despite lack of experience and necessary material resources, local authorities called upon all the spheres of the society to joint efforts to respond to the coronavirus pandemic. They set up priorities consisting of disinfection campaigns in streets and public places and allocation of isolation rooms at the border entry points and in the city.

“Essen region is part of Ghat and is located 2 km from the Algerian border. For that reason, it is a sensitive region and requires special consideration,” said Mr. Abu Khamis Musa, elder of Essen. “The General Company for Cleaning Services, and some local organizations in cooperation with the Water and Sewage Company, prepared the border crossing point and designated a place for quarantine. Although the work was carried out through our own efforts, it was quite good,” he added. As for the disinfection campaigns, the issue was more complicated because of the lack of needed equipment. “At the beginning, we were frightened and had no idea about what to do,” stated Abu Khamis.

Meeting demands of the city, contributing to COVID-19 response

Before the outbreak of the pandemic in Libya, the United Nations Development Programme (UNDP) had already responded to the dire needs of the city and had renovated some basic infrastructures. Al-Birkat Health Center is one of them. It is the main health institution in the area and was handed over in February 2020 after full rehabilitation through the EU funded “Strengthening Local Capacities for Resilience and Recovery” project. The rehabilitation of this health facility allowed access to basic health services to about 25,000 people, including children, women, immigrants, and internally displaced persons, who would not have access to them otherwise. Today, the medical institution is the main facility that conducts COVID-19 tests and has equipment for intensive care unit treatment of potential cases.Ghat suffered a lack of public cleaning after the emergence of ponds due to flood recession.

In mid-March 2020, the United Nations Development Programme (UNDP) supplied the municipality with four mobile pesticide sprayers through the Stabilization Facility for Libya (SFL). The equipment contributed to improve public hygiene in the city through spraying to combat rodents, insects and mosquitoes breeding grounds.Local authorities took advantage of this new equipment to launch a large disinfection campaign on 22 March 2020 which lasted for 35 days.

Mr. Ali Mortada, who heads the Spray Team at the General Company for Cleaning Services and coordinated the campaign said:”The Spray Team is specialized in pest and rodent control. As for epidemics such as coronavirus, dealing with it was a new task for us. Despite the lack of experience in fighting pandemics, we quickly obtained some related information and prepared a periodic plan.”

“We divided the team and started the campaign. I think we have done more than expected,” concluded Ali.The team regularly disinfected the city and the surrounding areas. The campaign focused on places most frequented by residents such as health centers and bakeries.

“We tried our best to implement this campaign, despite the lack of resources. Coordinating with other local agencies to provide chlorine was the major challenge we faced and tried to overcome,” explained Amal Al-Nani. “However, with support from international and local actors, we carried out the campaign, and confidence in local authorities was restored, ” she added.

“We participated in the campaign when the local authorities asked us to help in preparing and cleaning the border crossing point between Libya and Algeria. We used backhoe loaders provided by UNDP’s SFL, and will always be ready to provide support and assistance to serve the residents of Ghat.” said Mr. Ibrahim Mohamed, director of the Water and Sewage Company in Ghat.

“Pesticide Spraying vehicles are suitable for the climatic environment in the city. Furthermore, we have been able to reach some of the communities in the desert. The spraying devices are of a good quality as well. We will cooperate with the agriculture and environment sectors in the city to help and support in pesticide spraying process” declared Ali.

“If we had not received the equipment, then carrying out the campaign and responding to COVID -19 would have been very difficult. The response plan also includes the disinfection of mosques and schools when reopening in the future. We are now ready at any time to implement any action when there is any threat that requires our response,” explained Bilal Al Turki.

“I extend our thanks to UNDP Libya and those who had contributed to the provision of supplies. The equipment arrived at a time when we desperately needed it and added a lot in carrying out our tasks in the city of Ghat,” he concluded.

Through the EU funded project “Strengthening Local Capacities for Resilience and Recovery,” UNDP rehabilitated Al-Birket Health Center and will soon deliver an ultrasound Echo machine. The capacity of the Water and sanitation company to ensure public sanitation was reduced by the consequences of floods that the city experienced in 2019. Through this same project, UNDP supplied Ghat with two sewage suction trucks that helped the water and sanitation company to mitigate the damages of sewage networks and will contribute to enhancing hygiene standards in the municipality.

The initiatives undertaken by UNDP in Ghat are part of the “Stabilization Facility for Libya” and the “Strengthening Local Capacities for Resilience and Recovery” project.

Lead by National and Local institutions and implemented by UNDP with funds from 13 international partners and the Government of Libya, The Stabilization Facility for Libya aims to strengthen the legitimate and internationally recognized state authorities and foster national unity.  It does this by creating opportunities for peaceful reconciliation locally through community conflict monitoring and reduction, inclusive municipal planning, and practical improvements in basic services in each city where it works.

UNDP’s “Strengthening Local Capacities for Resilience and Recovery” project is part of the “Recovery, Stability and Socio-economic Development of Libya” programme funded by the European Union, through the Emergency Trust Fund for Africa – North Africa Window, and implemented in partnership with the Ministry of Local Governance, Municipalities, UNICEF and Italian Agency for Development Cooperation (AICS). The programme aim at improving living conditions and build resilience among vulnerable populations, including migrants, refugees, internally displaced people (IDPs), returnees and host communities.