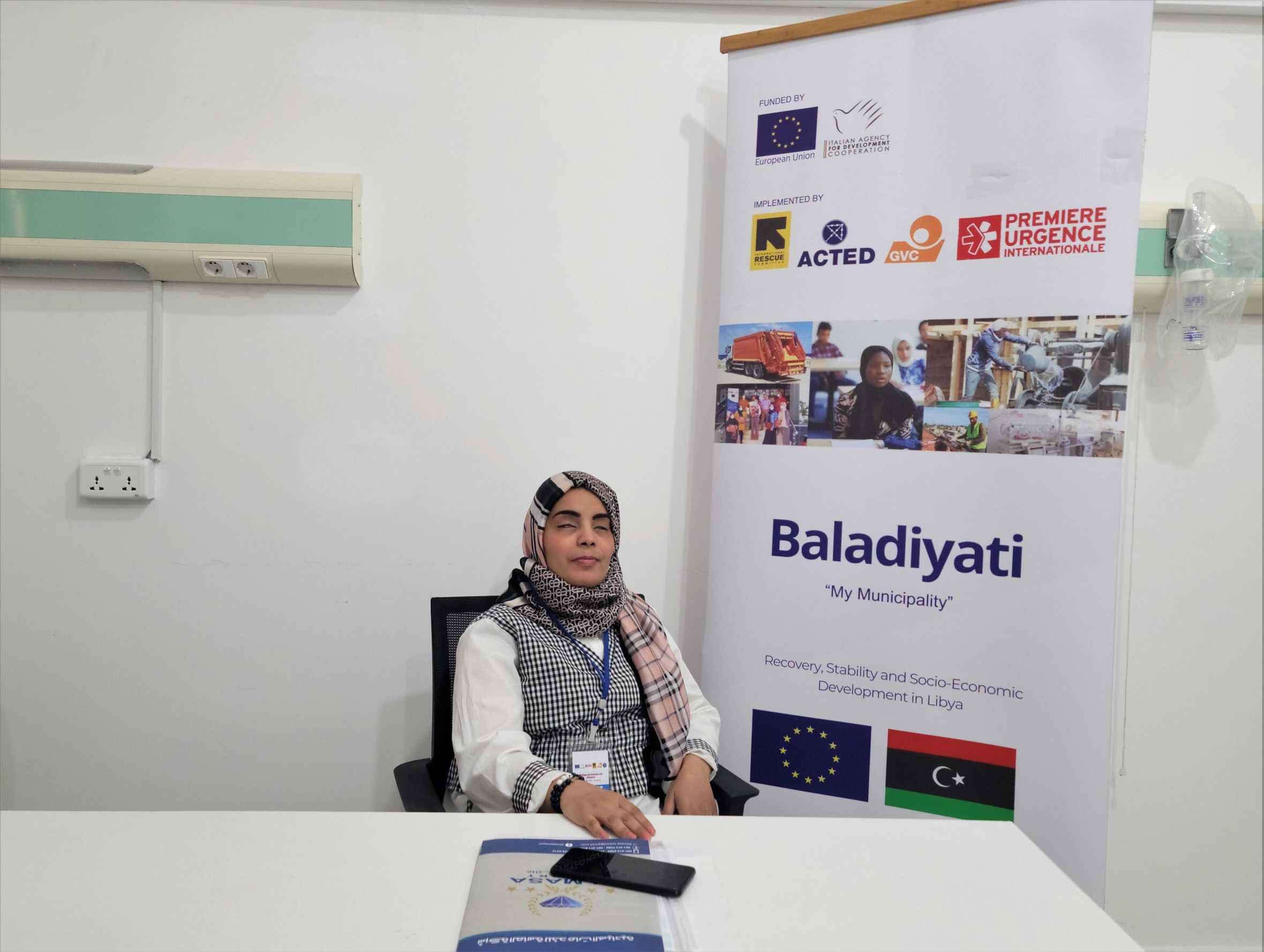 When Heba Mohmoud was notified about being selected for a training on humanitarian principles and right to health, offered by the INGO ACTED in partnership with the Italian Agency for Development Cooperation (AICS), she repeatedly asked: “Do they know that I am blind?”.

Born with a disease that caused her to lose her eyesight at an early age, today Heba works as a Junior Psychosocial Therapist at the Psychosocial Clinic in Ajdabiya, which is targeted for support under the EU-funded Baladiyati programme. For Heba and the other participants, the initiative of “training of trainers” (ToT) represented a great opportunity to learn about the international legal framework around the right to health: how to respect, protect and fulfil the universal right to medical care.

Heba tells us about the many obstacles she has had to face due to her vision impairment, starting from getting a higher education. She completed her primary and secondary education in a special school for blind and visually impaired children in Benghazi, run by the Al-Kafeef organization. In 2011, amidst the political unrest, Heba returned to Ajdabiya, an experience that she described as starting from scratch. “When I applied for the faculty of psychology in Ajdabyia, I was told that blind people usually undertake English, Arabic or Islamic studies. There was no precedent in my case. However, I was given the opportunity to attend a trial semester to prove my abilities. It was not easy, but eventually I graduated in psychology in 2017.”

Being selected for the training initiative came as a surprise. “I was sure that something was wrong and that I would be excluded because of my condition. On the contrary, my experience proved that impartiality is among the programme’s values, in practice, not just words. The training turned out to be a great learning experience for me and, I believe, also an opportunity for other trainees to meet and interact with someone visually impaired. I really enjoyed and valued this opportunity”.

Heba is currently volunteering in a school for blind and visually impaired people in Ajdabiya. “My aim as a volunteer in the school is firstly not to allow blindness to prevent children from continuing their studies, and secondly to communicate to anyone I can that the only difference between a blind and non-blind person is in the way they acquire knowledge; one acquires it through sight and the other through other senses”.

This story was collected by ACTED and written by AICS under the Baladiyati programme, funded by the European Union through the EU Trust Fund (EUTF), with the aim to improve access to basic services in 27 municipalities throughout Libya. Within this framework, ACTED has worked in coordination with AICS to improve access to health services for vulnerable groups by implementing interventions such as the refurbishment of priority health facilities, the provision of critical medical equipment and supplies, the rollout of training packages for health practitioners and awareness raising initiatives.

Previous PostAl-Jala School in Bani Walid: from childhood memories to hopes for a better futureNext PostPromoting a better quality of life and peaceful co-existence through sports and recreational spaces in Libya
0Shares
ACTED LibyaAjdabyiaBaladiyatiEUFT LibyaEuropean Union Libyahealth in LibyaItalian Agency for Development CooperationItalian Cooperation in Libyaright to health